Life and other Stories

“She was 5’10.
Milk Skin.
Everybody wanted some.
She Put their love above and in the end she was overrun.

Couldn’t undo all the damage was done.
Couldn’t break through, call the institutions.
Oh no, oh that poor child.

What do you do with a heart so broken?
Everyone acts like they don’t notice.
Oh no. oh..

Now there’s no friends, only fears, and they don’t keep her safe at all.

There’s no life, only years, no shoulders when the tear drops fall.

It’s hard to be brave on the road less travelled. Out of control, her hopes unravelled.

Oh no, oh that poor child.

No one wants to be the one to break, always living those mistakes instead of clarity.

No one talks about mental illness.  I watched the slender, middle aged woman set the paper bag of groceries I had brought on the stovetop.  She took some ears of corn with the husks still on and then put them in a skillet and turned the burner under the bag on high catching it on fire.  She had called me screaming at four in the morning for the tenth time, yelling about her cats  and lord knows what else. Before she could finish one sentence was on to another disjointed thought.  I asked if she had eaten lately. She  had said she couldn’t afford food.  After a pause, she said ” or her medicine”.   I came to find out she had gone cold turkey off a handful of tranquilizers and anti-psychotics and anti-depressants a few days earlier.  When I arrived at her door she had blood on her face from a cut on her eyebrow and her glasses were broken.  She  had lost her dentures somewhere and had no teeth, making it even harder to understand her.  There were little spoonfuls of wet cat food on every clean surface, because she was very concerned about keeping her cat alive while she was spinning out of control.   In the corner was a stack of political yard signs she said she had gathered from everyone’s yards in her neighborhood.  She said they were tacky.

I set the burning bag of groceries on the pile of dishes in the sink and hosed it down.    As I was putting the produce in the fridge there was a knock at the door.  It was a fireman responding to a call.  She pushed past me to speak to him and said with her gums “Oh I’m so glad you are here!”  She dragged him over to her window and she slurred  ” What do you see?”

“Everything is grey and drab and boring I told him to leave me alone!  It needs some red! So that’s why I called you with your fire truck when I was a little girl.”

She was an artist after all. Before her illness had become severe, she worked for the state paper as a graphic designer and once upon a time was quite a good painter.

I pleaded with the fireman to take her to the hospital. He said it was his fifth trip to her house that week and that he couldn’t unless she was a danger to herself or others.  I pointed out that she had just lit a bag of groceries on fire and didn’t notice. That she could potentially burn the whole apartment building down in the state she was in..  He said he still could not take her.

“Only if she wants to go.   Ma’am, would you like to go to the emergency room and get that cut looked at?”

“That place with the bad lighting and dust blue chairs and disinfectant my cat doesn’t like it when I go there and forget to tip your waitress. Those bad men.”

And so the fireman had left, but he did flash the red light just once for her, which I appreciated.  She got picked up after a week of events like this because she was lying in the road on a below zero night, throwing rocks at her window and she threatened to kill someone walking past.  She lost her cat, her apartment and ended up on the street before she was found and was given a place to live with a good christian couple who helped her get back on  her feet.

She was my mom. 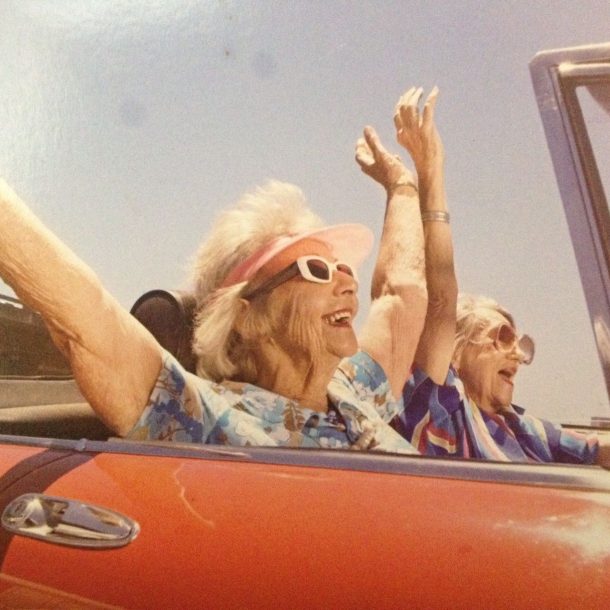